I’M THE BLACK JEEP OF THE FAMILY

.  The old and suggestive rock formations of Arizona present many opportunities for us humans to engage in our ingrained and idiosyncratic habit of seeing patterns in random information.  This information may be in the form of numbers, events and for our current activity, rock formations.  We have a need for order in our world and so the mind provides it, even when sometimes, it isn’t actually there.

Some people hear messages when they play records backwards.  A woman once saw the Virgin Mary’s face on her morning toast, and then others who saw it concurred.  There are animal shapes in clouds, faces on the surface of Mars and of course, the Man in the Moon.

On this very trip, we see two entirely separate rock formations that cannot be mistaken for anyone else… 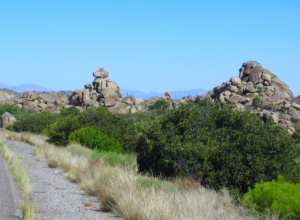 .  We do not have time on this trip but on the north edge of Scottsdale is a rock formation that, I’m told, looks like a relaxed penis.  It is rock hard, even though it is flaccid.  Based on what we’ve seen so far, which is the uncanny resemblance of rock formations to other things or beings, like Snoopy, this one probably looks exactly like what it is advertised to look like, which is a penis.

Make of this as you will.

.  We drive past the town of Two Guns on historic Route 66.  Eleven miles later on Route 66 we pass by the ghost town of Twin Arrows.  Representative of ancient battles.

Even though you get great views of Cathedral Rock, we skip this trail in favor of others when hiking in Sedona.  It’s here in this column for the name.

.  A bear made of wood stands at the gate of a housing complex.  It holds a sign with the name…

.  Posted as you enter Oak Creek, a community that does all right for itself, is a sign reading…

.  Leaving the rental car garage, showing the young woman our paperwork, she opens the exit gate.  This sign gives us clear instructions…

DO NOT BACK UP

Wait a minute.  These are your cars, and as you know, we renters are not always as responsible for your property as we would be with our own.  Why ever would you make it so easy for us to ruin your equipment!

Anyway, as Lisa drives through the gate, the agent begins to whistle the theme from The Addams Family.  Jaws might be more appropriate.

.  Soon after leaving the airport, when we are on the interstate highway, Lisa says, “I wonder if dogs in back of vehicles get it.  I mean, do they know where they are going?  Do they care?”

Reminds me of a story about an Eskimo who was visiting the city where he was taken from one floor to another in an office building.  Later, when asked to describe his experience, he reported, “We walked into a small room and everyone turned around to face the opening.  Then, from within the walls, a door slid into place over the opening to close up the room.  Someone outside shook the room a little and in a few moments, the door slid back into the wall and someone had rearranged all the furniture.”

Just outside Sedona, Lisa and I are hiking the Courthouse Butte Loop Trail which winds through extraordinary rock formations on a smooth dirt path lined with yucca, sotol (which is a cousin of Tequila) and manzanita.

On our route, we see people in shorts and sneakers climbing all over the well-known Bell Rock, like ants on an anthill.  Bell Rock is identified as a vortex, a center of spiritual energy, whatever that means.

Three miles in on our trek, a hiker passes us, smiles and says, “Happy Memorial Day.”  This catches me.  Happy Memorial Day…  Is this right?  Seems kind of a funny thing to say for the day we honor the members of the armed forces, the dead ones.

Okay, I’ll have a happy Memorial Day because it’s vacation time.  But this day is also, and primarily, in memory of those who didn’t make it through.  When you think of it, it reflects a duality of our nature.  We make a big deal of not fighting, but we constantly make enough of a big deal of things that we begin to fight.  Then we commemorate the death of our fellows who were killed in the name of peace, by having a picnic, or taking a hike.

My brother is a veteran.  He served in Viet Nam in the 1970s where he sustained a million dollar wound.  That’s an injury that doesn’t kill you, but is serious enough to get you removed from battle and in his case, to spend six weeks recuperating in a Japanese hospital and then come home without permanent damage.

Lisa and I hike on, among the mountains and oak and juniper, the dusty footpaths, the dry washes and red and orange sandstone, the basalt, the towering vertical rock walls, thinking that we are two of the luckiest people we know.

When we return back to the parking lot, someone had set up a little shop in the hatch of his vehicle.  It is 10:15 in the morning, there is a cloudless sky and temperatures are in the high 80s.  He’s making a profit selling hats. 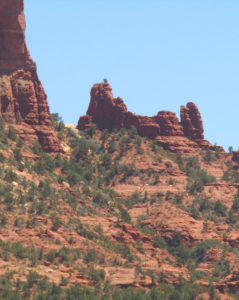