Charged by an Elk

“I can’t believe you got charged by an elk,” Lisa says.

Yah, I am surprised too.  The previous elk I saw, which was yesterday, was quite tame.  She was drinking water from the well pump outside the laundry room where campers were hanging out waiting for their sweaty clothing to dry.  This cow elk was naked.

Now we are hiking the Rim Trail and I am running in the opposite direction from another cow elk.  I am, at lightning speed, recalling all the behaviors one should engage if a bear is chasing you;  I know what to do with an aggressive bear.  I also know what to do with hornets.  I even know what to do when facing an alligator.  But elk are a behavioral mystery to me.  This one is my first.

In review, Lisa says, “We did the exact right thing.”

Yeah, we made it safely away.  The elk decided that munching on chokecherry, elderberry and dandelion was preferable to munching on me.

The only time I was more frightened was on a hike in a wetlands/prairie area in southern Florida.  A large turtle crawled up from a hidey-hole and…  I don’t know, it may have left its young charges in the hole, turtlettes as it were.  It began to snort, stamp its leg, and then pursue me.  It may have been an aggressive attack, but I have to admit to laughing so hard that I just couldn’t take it seriously.

Lisa said at the time, “I can’t believe you got charged by a turtle!” 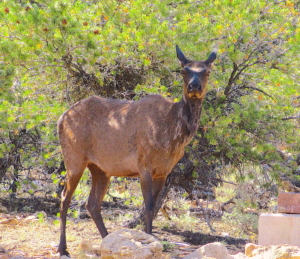 Nothing Snoopy!
Scroll to top