Lisa drives us north, leaving Colorado and entering Wyoming.  I navigate.  All my driver knows is that we are on our way to Devils Tower and that we are going to make a stop on the way.

As we approach Douglas, Wyoming, I have her get off the interstate highway and make a few turns.  I direct her to a parking space where she expertly parks and turns off the car.  This is when she sees it.  She squeals with delight.  Lisa rarely squeals.  The last time she squealed was when we were in Ohio and turned a corner to reveal the immense Longaberger Basket building.

This time her squeal is elicited by…  the world’s largest jackalope.

I have a T-shirt… 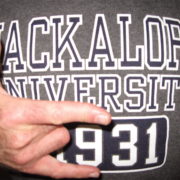 I walked into the State House in Vermont one time wearing this shirt.  The greeter looked at me and asked, “Is that real?  Where is that school?”

Um, no.  Jackalopes are not real, although…

.  The jackalope is the offspring involving a male jackrabbit and a female antelope.  Picture that if you dare.

.  Concerning jackalopes making jackalopes, they boff only during lightning flashes.  Could be why there are so few of them.

.  The female jackalope occasionally sleeps belly up.  If you are gentle, you can milk her while she sleeps.  The milk is pre-homogenized due to all the leaping and hopping about.

.   Even though their brains are generally smaller than that of a domestic house cat, the jackalope is clever, possessing the ability to mimic almost any sound, including the human voice.  In the Old West, when on the range, cowboys would sing to their cattle.  The jackalopes, staying hidden in the brush, would join in.  At first the cowboys thought their cows were harmonizing with them but then they realized how dumb that was.

Sometimes when pursued, the jackalope might imitate one of the hunters by saying, “Hey!  He went thataway.” 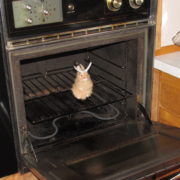 jackalope on the range

.  Most jackalopes are tenors.

.  Like the kung fu guy on television, a jackalope will fight only when necessary, using its antlers as a weapon.  Jackalopes are known as the “warrior rabbit.”

.  The first sighting of a jackalope was in Douglas, Wyoming in 1829.  The Douglas Chamber of Commerce continues to offer jackalope hunting licenses.  However the season is short, permitting hunting only between midnight and 2 a.m. on June 31. 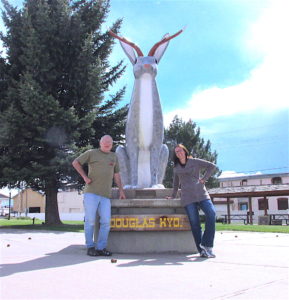