Our plan this time is to camp near trailhead.  It’ll give us an earlier start to our hike.  But something about the high probability of thunderstorms in the area makes me reluctant to stay in a lodging with only a nylon roof.  I’ve spent nights in my tent during thunderstorms and, let me tell you, it’s exciting!  It’s not the thunder or the rain or even the idea that a tree will fall on me that is my concern.  Under consideration is that my tent is suspended by poles made of the fourth best conductor of electricity in the world.  That leads to my additional concern of the possibility that my aluminum poles will attract even one 15 000 002-volt lightning bolt.  Dang, if that hits my tent, it will, I’m sure, totally ruin my day.  So…  yeah.

A lightning bolt, which is usually only an inch or two wide, instantly heats up the air around it to over 60 000°, sometimes to more than 100 000° (five and a half to nine times the temperature on the surface of the sun.)  The total energy of a strong thunderstorm can exceed the energy of an atomic explosion.  You could power the entire United States for twenty minutes with the power released in one typical storm, enough electricity to make, oh, eight slices of toast for every American or enough popcorn to cover the Statue of Liberty.

Bolts of lightning can slice through the atmosphere at 220 000 002 miles per hour, which is about ⅓ the speed of light.  This is outrageous, you know.  For comparison…

Our concern on this Highpointing trip has to do with getting hit by lightning and dying.  We don’t want that.  How likely are we to die by lightning?  The chance of dying from heart disease or cancer is 1 in 7.  Dying in a traffic accident?  1 in 100.  How about getting caught in a tornado and losing your life?  1 in 60 000.  Dying when an airplane crashes into your home?  1 in 250 000.

So you see, drowning in your bathtub and having an airplane fly into you while you are home (making a lot of toast) are less likely and thereby safer activities than getting killed by lightning.

Still, getting hit or killed by lightning is an extremely rare event.  And yet, I want to briefly mention, and pay tribute to, park ranger Roy Cleveland Sullivan.  Over a period of 35 years in the mid-20th century, Mr Sullivan was hit by lightning seven times.  Seven!  That must be some kind of record.  In fact, it is a record.  All seven strikes were verified.  Sullivan was hit by lightning one additional time as a child but this one was never officially confirmed.  That would make it eight.  The odds against getting struck by lightning this many times are so high that if it hadn’t happened, you’d be inclined to say it couldn’t happen.  What are these odds?

As a ranger, Sullivan worked outside, spending more time in lightning zones than most of us.  Which in no way accounts for his, you could say, striking luck.

At the age of 71, Roy Sullivan fatally shot himself.  Didn’t want to get hit by lightning again?  Nope, nothing so mundane.  He was distraught to the extreme because his romantic advances were rejected by the woman of his desire.  The one time he wanted lightning to strike, he couldn’t make it happen. 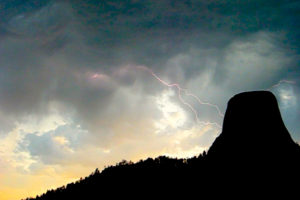