Penn’s Woods or the Story of Willie’s Willie

Pennsylvania.  Sylva refers to the woods, the forest.  Penn means “Penn”, as in William Penn.

William Penn was the father of William Penn.  Junior was born into privilege in London in 1644.  Senior was a rich, influential, land-owning gentleman.  When you look closely at son Bill, he glimmered with talent.  He is credited with being a real estate entrepreneur and a philosopher.  You don’t get that combination all too often (although I would put my friend Veta in that category.)

William Penn Junior’s fame is largely due to his establishment of the British colony that became the Province of Pennsylvania.  At the time he came to America to escape religious persecution, King Charles II owed back pay to the elder Penn for his days as an admiral, but since Penn Senior was now dead, the Crown instead compensated the son.  Chuck awarded him land on this “new” continent.  Penn came here in 1682 and established Pennsylvania as a refuge of religious freedom.  He drafted his Plan of Union, ideals well represented in the penning (heh heh) of the U S Constitution.

Currently William Penn, in the honorary form of a statue, stands atop City Hall in Philadelphia.  For the longest time, it was generally agreed that no building taller than the height of Penn’s hat would be erected in the city.  It wasn’t actually a law, but everyone seemed happy to go along with the idea until the mid-1980s when One Liberty Place went up.  At 945 feet, it topped out 397 feet higher than William Penn’s headgear.

Thus began what is known as the Curse of Billy Penn.  It seems that once full-on arrogance was embodied by One Liberty Place for exceeding the height of the William Penn statue, contrary to custom and decorum, not one of the city’s major professional sports teams was able to win a championship.  And this is in the context of a long string of successes by their baseball, hockey, football and basketball teams.

Twenty-one years later, the construction of the new Comcast Center was completed.  It stands 974 feet tall, fully 29 feet higher than One Liberty Place.  Part of the dedication ceremony featured the raising of a steel beam to the skyscraper’s highest point.  As is tradition, the beam was signed by construction workers and an American flag was affixed.  In addition, a 25-inch tall statue of William Penn rode that beam too, carrying Billy Penn to a height where he could once again reign over the land.  The next season, the Philadelphia Phillies baseball team won the World Series.  The curse was broken.

At the apex of City Hall, Penn is holding a copy of the treaty he signed with the Lenni Lenape tribe of Native Americans, the aforementioned Plan of Union.  He is facing the direction where the treaty was signed, which is to say, east.  This is all very nice but…

Approach City Hall from Fairmount Park to the northwest and this is the view you get. 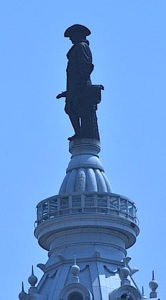 Look closely.  Well actually, you don’t have to look closely.  Tell me no one noticed this?  Surely, this is not what Alexander Calder envisioned when he produced this bronze statue.  I will put this delicately, in case you’re not up to speed here.  The namesake of my home state?  William Penn?  You can see his johnson.  I mean, founder dude’s got a hard-on!  You could call him “Willie Penn.”

Now erase that picture from your mind.  Gaze rather upon this visage from a slightly different angle.  Please.  You will see that what at first appeared to be his schwanz is actually part of the wooden scroll of the treaty document.  (Penn sporting some wood?  No.  Stop that.) 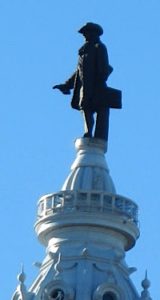 I propose that we replace Pennsylvania’s current boring motto, “Virtue, Liberty, & Independence” with a new slogan:  “Penn is happy to see you.”

The Fuel Can Dilemma Fear I — Phobias
Scroll to top