Enormous pyramids exist all over the world.  Egypt alone has 138 of ‘em including some of the earliest pyramids ever built.  These structures are west and northwest of Memphis, in the desert sand.  Cairo is an hour to the north.

In the 1930s, a French hardware store owner, ironmonger and pendulum swinger named Antoine Bovis was visiting the King’s Chamber of the Great Pyramid in Egypt.  In one area, he noticed a pile of dead animals.  Bovis called himself a radiesthesist for his belief in the concept used by dowsers and practitioners of geomancy.  They held that their power derived from a “cosmo-telluric energy” associated with particular locations.  I mean, right?

Bovis drew the conclusion that the pile of animal corpses had been there for a long time.  He was amazed that there was no decomposition of the bodies.  “It must be the pyramid that is preserving the organic tissue,” he thought.  And then he started telling everyone he could find.

Strange thinking here.  Most of us would simply assume that a pile of nicely preserved dead bodies had simply not been in that pile for very long.  I mean, right?  Genius works in mysterious fashion.

In all fairness, I must tell you that this account may be bogus.  Bovis claimed that he was never even in Egypt.  But he still advanced his theories, formed through “armchair reasoning and occult experiments.”

Nonetheless, his ideas caught on.  Pyramid power was all the rage in America in the 1970s.  Pyramid power could preserve foods, it was claimed.  It could improve health function, trigger sexual urges, and pets could thrive under open frame pyramids.  The most shameless claims were the mummification of small animals, based on Bovis’ alleged conclusion, and preservation of living tissue.  But the all-time best, in my opinion, is that if you put a razor blade inside a pyramid and align it correctly, the blade will become sharper.  The offered reason is simple:  the pyramid acts as “an effective resonator of randomly polarized microwave signals which can be converted into electrical energy.”  (This quote is from Bailey and Hoffmann in Mind & Society Fads, Haworth Press, 1992.)  Obviously, the polarization accounts for the sharpening of razor blades.  I know.  You were already thinking that, weren’t you?  I love these guys!  But why didn’t they just say, “cosmo-telluric energy” and then we would all understand.

Lisa and I are visiting the Pyramid in Memphis, Tennessee, officially “The Great American Pyramid.”  It’s just across the street from the Pyramid Cleaners and Tailor Shop.  Opened in 1991, it is 32 stories tall, 17 feet higher than the Statue of Liberty in New York Harbor.  It has an arena that can seat 21 000 people.  Why would 21 000 people go into this building to sit?  Perhaps they desired to sharpen their razor blades.  Um, no, that’s not it.  They went there to witness athletic events, concerts and holy convocations.

Another sports venue was built not too far from this one and as it gained in popularity, the Pyramid’s draw diminished, first becoming a sporting goods megastore, and then closing in 2004.  Now it sits.  Sharpening razor blades.

The Pyramid does not sit alone.  Four black kitty cats met us just outside the gate, perhaps calling the Pyramid their home.  Obviously thriving. 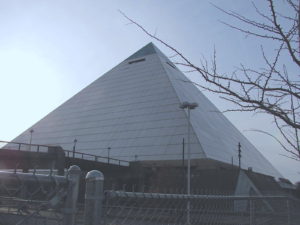 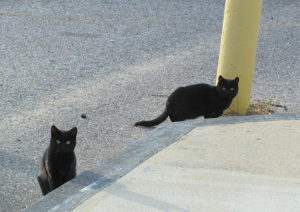