The Ballad of Sophie Labowitz

Our hike with Dave’s family is so much fun that we promise we will get together on the trail again.  We keep our promise and six months later, we meet at Gifford Pinchot State Park in central Pennsylvania.  Here we make our home in a cabin for the weekend.  Friday night we cook for each other.  We play games and talk and talk.  We pick up right where we left off.

The next day, because we hike so well together, we get out on the Appalachian Trail.  We walk about the same number of miles as the average temperature for the hike:  10.8 miles, 12.5 degrees.

That evening, pleasantly tired, we make pizza and are just settling in when there is a banging on the wall of the cabin.  Then a knock on the door.  Banging and knocking?  At a cabin in the woods at night?  I hope it’s the ranger.  Which is to say, I hope it isn’t anyone we don’t want to meet.

Dave’s son answers the door and just stands there looking out.  “What’s going on?”  Finally, two people enter.  One of them is Perelman.  The other person is his wife.

Oh my goodness!  Perelman!  My mouth hangs open, I am speechless.  Soon I realize that, at least, I’d better close my mouth so that the pizza I am chewing doesn’t fall out.  As I say, Perelman and I haven’t been in touch for some time.

Dave, who came up with the whole surprise-Perelman-at-the-doctor’s-office-with-Sophie idea, now worked the surprise-Kenn-with-Perelman gig.  But at the same time, Perelman had no idea either.  After the whooping and hollering and hugging had subsided, we all settle in for some serious catching up.  Picked up right where we left off…  Eighteen years ago. 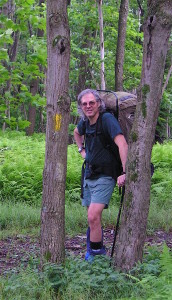